It’s Grid Iron meets Norn Iron in Sunday Night Football as Northern Ireland take on the USA in the St Patrick McNair Soccerball Challenge Cup. A leaked report revealed that Northern Ireland won the toss to wear green in what is the freshman year of this international competition.

Links between the two countries go back a long way, with a number of US Presidents claiming Ulster roots – Johnson, Buchanan, Roosevelt, Wilson, Carter and of course O’Bama. The Yanks did miss out on the main man though, as President Boyce was unable to be prised away. “My Clifton Villa is a White House”, he would claim.

FIFA’s ever-changing rules mean that Conor Washington and Stuart Dallas are ineligible for this game, as it turn are American strikers Dan Patrick and Craig Avon. Craig’s son refutes claims that his dad’s unavailability is due to being at a sales convention.

The American plane, ‘Top Gun’, has already departed from Bangor Maine International Airport and is expected to touchdown at Bangor International George Best Airport around lunchtime.

Foam fingers at the ready, you guys, and go team!

First official meeting, but President Clinton did claim a victory here in 1998.

(with apologies to Soccer Guy!) 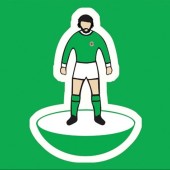 NO WEE BUNS IN BELFAST